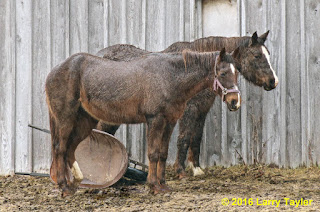 Welcome to my second blog. I've been thinking a lot lately about why photography has been calling me so persistently - almost naggingly - in the last few months. What keeps surfacing for me is the concept of photography as a form of meditation. The above photo is a case in point. I sent it to my dear friend Jean in Toronto, along with a commentary about it. She suggested that I use the commentary as a mission statement for both this blog and my photography. Here is a slightly edited version of what I wrote to her:

The photo of these two horses has entered my soul. I took it on a nasty, sleety March day on Gilead Road in Prince Edward County. The horses were so beautifully stoic. I also love the biblical allusion in the road name - the balm of Gilead is such a healing metaphor. The kicker is that I wasn't planning to drive on Gilead Road…but somehow there I was making the turn…and then the horses appeared. It was almost as if I had been summonsed. One of the most magical things about photography is the feeling I sometimes get that the photo is calling me - an act of witness? or worship? I look forward to exploring this spiritual dimension of photography at the annual Quaker Gathering in Minnesota in early July - I'll be taking a five-day workshop called 'Contemplative Photography'. So many gifts.

That pretty much says it all. And I thank Jean for her support and encouragement. 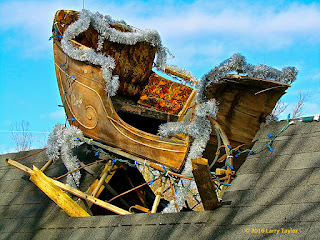 In my first blog, I promised to tell the story behind the odd image of this sleigh. The truth is that I don't know the story. One Sunday in mid-December, 2014, I was wandering along Belleville's Waterfront Trail near the foot of Herchimer Avenue. The Waterfront Trail is one of Belleville's treasures, and walking it is not only relaxing - it's also filled with visual eye candy.

Case in point: this odd sleigh.

It seemed to be crashing through the roof a newish log cabin. The cabin was placed on the deck of a large trailer. The trailer was parked in the Herchimer Avenue boat-launch area on the shores of the Bay of Quinte. There was no truck attached to the trailer. It had not been there the day before; it was not there the day after. There were no Santa Claus parades that weekend in the area. (I checked.) And besides, who - with the possible exception of filmmaker Tim Burton - would create a Santa Claus parade float with a sleigh crashing through the roof of a cabin on a flatbed trailer?

So - there it is: an antique sleigh, tacky tinsel, fairy lights, and someone with too much time on their hands. (And, yes, dear reader, I acknowledge that I just used a singular 'their' - a clumsy attempt to repair a design flaw in our language.) Make of it what you will. (The photo, not the design flaw.) And, no, despite what some people have said, I did not Photoshop the image.

As always, I welcome your feedback.

Until next time,
LT