Being at one with the photo… 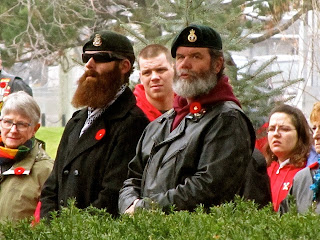 A confession: most of my photographs are taken without much thought or analysis. I see an engaging image in the corner of my eye and respond immediately. Out comes the camera and the clicking begins. It all happens very quickly.

Case in point: the photograph above. I took it at the 2015 Remembrance Day Ceremony at the Belleville cenotaph. I was standing off at the side of the crowd scanning faces. Suddenly, these two men appeared. The beards, the berets, the shades. I snapped immediately without thinking, not knowing if I'd captured anything interesting. A moment later, the image was gone. It was only when I downloaded the photos at home an hour later that I saw the power of their faces - and the power of their unspoken stories. And then I saw the other faces - the rapt attention of the woman at the left; the squinting man with the brush cut in the centre; the woman in red with her intent gaze on the right; and the focus of the partially hidden woman on the far right. Six stories in one shot. And all of of them captured in a nanosecond.

I love this shot, although - quite frankly - it makes me feel a little creepy, as if I had invaded the privacy of these people. Most of my photography to date has been of trains and puppies and flowers and stuff - not people. But photographing people is a topic for a future blog, so today I'll return to the topic of photographic spontaneity. 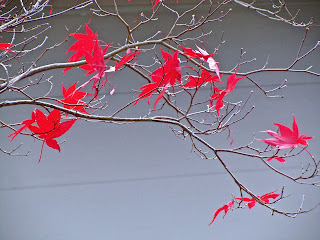 And this is where the concept of contemplative photography has entered my awareness. Case in point: the above photograph taken last November in Kitchener. While Bill explored fabrics, I walked around a Kitchener neighbourhood that reminded me of Rosedale - old-money mansions with leaded windows, slate roofs, meticulous gardens, and the discreet whiff of 'staff'. One house, however - a large, 1950s one-storey outlier - took my attention. Everything was quietly grey - the brick, the roof, the cars, the garage doors. The one flash of colour was the remaining leaves of a Japanese maple. The contrast of the delicately fluttering red leaves against the grey garage door was breathtaking. I was mesmerized, summonsed to stillness. I simply stared. It was only after several moments of observation that I brought out my camera and captured the image above. I didn't realize it, but it was my first experience with contemplative photography.

In future postings, I will be exploring contemplative photography more fully. In the meantime, here's a highly recommended book: The Practice of Contemplative Photography/Seeing the World with Fresh Eyes, by Andy Karr and Michael Wood (Shambhala Publications, 2011).

Until next time,
Larry
Posted by Larry Tayler at 13:36