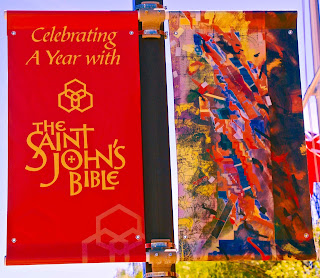 “Look at how a single candle can both defy and define the darkness.”
- Anne Frank

“Just as a prism refracts light differently when you change its angle,
each experience of love illuminates love in new ways,
drawing from an infinite palette of patterns and hues.”
- Sharon Salzberg,
Real Love: The Art of Mindful Connection

Cristina Vanin is one of those people that you just know is a blessing to humanity. She is Associate Dean at St. Jerome’s University, a Roman Catholic college affiliated with the University of Waterloo. And this year she is the official keeper of two volumes of the renowned Saint John’s Bible, currently in residence at St. Jerome’s. 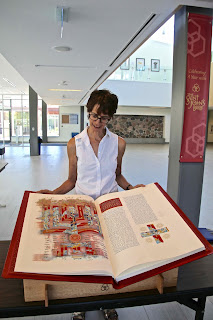 I first encountered Dr. Vanin in a beautiful episode of the CBC Radio program Tapestry. (link) In that program, Mary Hynes, Tapestry’s wise and insightful host, takes her audience on a journey through the creation of The Saint John’s Bible. Commissioned in 1995 by Saint John’s University in Minnesota, the seven volumes of The Saint John’s Bible comprise the first hand-written, illuminated Bible to be created in the last 500 years. It took 23 artists and six calligraphers fifteen years to complete the 1127 pages of the Bible. And it is fabulous – a feast for the mind, the heart, and the soul.

The idea of creating an illuminated Bible to mark the millennium came from the famed British artist and calligrapher, Donald Jackson. He approached the Benedictine monks at Saint John’s University with his idea. A remarkable men's Catholic university, Saint John’s readily agreed – and fifteen years of trans-Atlantic collaboration began.

Side note: I visited the campus of Saint John’s last July when I attended the annual Quaker Gathering at the nearby College of Saint Benedict, a Catholic women’s university that partners with Saint John’s. The campus of Saint John’s is dominated by the impressive Abbey Church and Bell Banner, designed by the modernist architect Marcel Breuer in 1954. Its brutal beauty is a bold affirmation of faith and mission. It does not surprise me that the Benedictine monks who commissioned the Abbey Church would also commission the equally bold Saint John’s Bible. 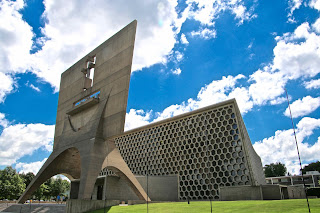 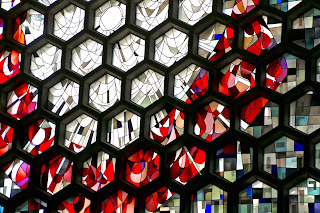 Back to the Bible: The original seven volumes of The Saint John’s Bible (SJB) remain on the Saint John’s University campus. To help share the SJB, a heritage edition was published that emulates each feature of the original. It is two volumes of the heritage edition (The Pentateuch; Gospels & Acts) that are in residence at St. Jerome’s this year. The Gospels & Acts volume is on display in the atrium of St. Jerome’s Academic Centre; each Wednesday morning at 11:45, there is a page-turning ceremony.

And it is this page-turning ceremony that Bill and I attended on July 5 at Cristina’s invitation. Such a warm, welcoming, and knowledgeable host she was. When I first saw the SJB, my breath was literally taken away. It was awesome to directly experience its beauty and physical presence. Imagine my delight when Cristina invited me to be the page turner! Afterwards, she took the volume out of its glass case and set it up on a nearby table, at which time she showed us each page, allowing me to photograph many images.  It was a memorable experience, as I hope the photos that follow will affirm.

Bill and I plan to return in November for events marking the end of the SJB’s year at St. Jerome’s, including a presentation by Father Michael Patella, chair of the Committee on Illumination and Text that shepherded the project, and a performance of Handel’s Messiah at Kitchener-Waterloo’s Centre in the Square that will feature large-scale projections from all seven volumes of The Saint John’s Bible.

About these photos: from the beginning of this blog, I have written about photography as a spiritual practice. I hope I don’t sound precious when I say that my camera is an extension of my soul. But it’s true, just as The Saint John’s Bible is an extension of the souls of its creators. In that spirit, I offer these photos - illuminations for the journey. Next week, I plan to write about the same spirit of illumination in my own photography. 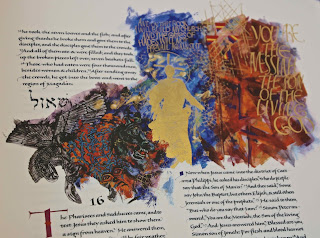 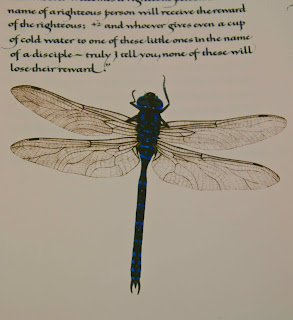 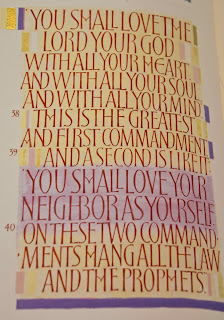 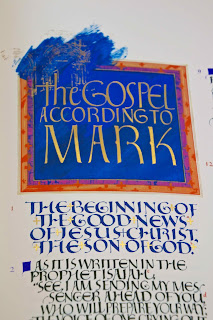 Beginning of The Gospel According to Mark (Aidan Hart) 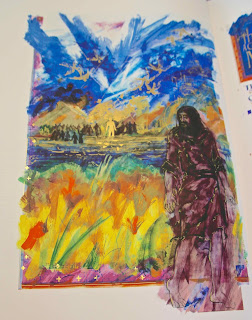 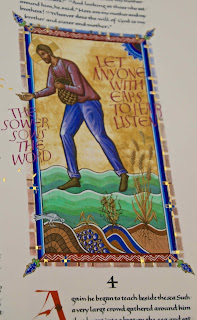 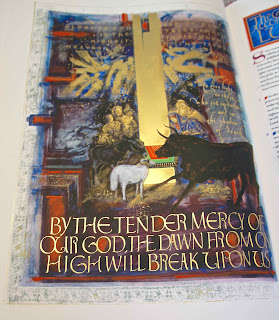 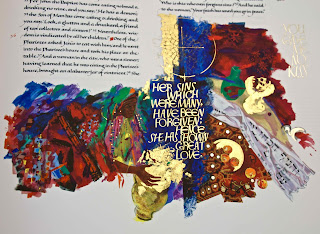 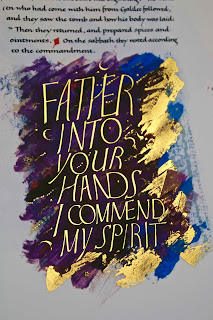 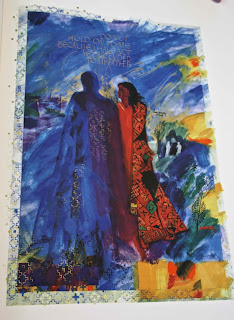 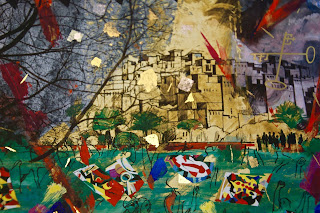 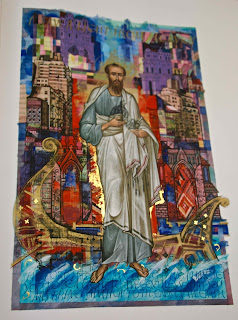 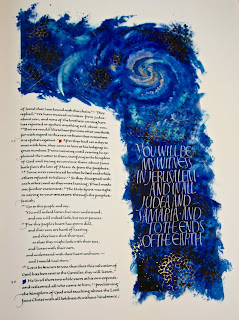