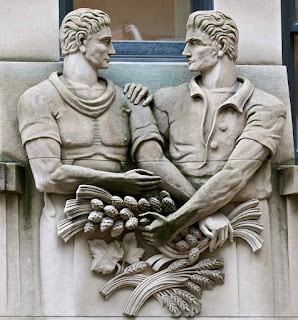 “What is truth in photography?
It can be told in a hundred different ways.”
- Sally Mann, American Photographer

A bit of fun today.

I’ve been reading a lot lately about photojournalists and their responsibility to the truth. After all, a photo of Rohingya refugees fleeing Myanmar has to be just that – no flights of imagination. The image can be moving, engaging, and provocative, but at the end of the day, it’s an image of desperate people fleeing violence.

At the same time, photographs can also tell stories that have nothing to do with the circumstances of the original image. People looking at a photo can read into it all manner of fanciful interpretations. I call this form of storytelling ‘fictional photography.’

And that’s what I’m focusing on today.

For the purposes of this blog posting, I am a teller of tall tales, not a photojournalist. Below are six of my photographs. Under each is a piece of micro-fiction inspired by that photograph, followed by a brief description of the actual circumstances of the image.

Enjoy the photos – and the stories! 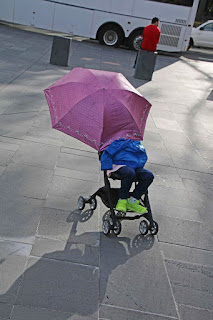 Her parents told their friends they did it to preserve Tina’s innocence and to protect her from life’s harsh realities. However, the truth was more self-serving: keeping Tina forever two kept her parents forever thirty.

Immortality – what a timeless concept!

The actual picture: photographed in front of Sydney’s St Mary’s Cathedral, April, 2017. I never did see the face of the person in the stroller. 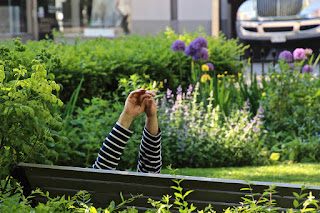 The previous evening’s Mime Society annual dinner had been a challenge for Marcel. He had hoped to win – finally – the Society’s prestigious “Ebony and Ivory Mime Artist of the Year Award,” but it was not to be. He had spent days rehearsing the silent gestures of his acceptance speech, but when Fleur LaTulippe won for the third year in a row, he threw up his hands and fled the ballroom in tears. In the bar next door, he quietly drank away his sorrows. The owner kicked him out at 3 am, after which he stumbled to a nearby park and fell asleep – no snoring – on a park bench. When the sun rose the next morning, Marcel awoke refreshed. He stretched his arms and belched gloriously. It was time to break his silence.

The actual picture: early morning at St. James’ Park, Toronto, June, 2017. And I love the stripes! 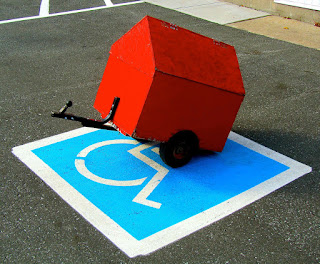 When Red Wagon was born, she had been a disappointment to her long-haul trailer parents. They had been expecting something a little more robust than Red, at the very least something with double axles and more carrying capacity. After all, she was expected to contribute to the family trucking business. New tires don’t pay for themselves, don’t you know.

But Red was a determined little thing, and she soon earned her special needs permit so she could help people at the nearby seniors’ home.

What she lacked in tonnage she made up for in kindness. After all, how do you measure the capacity of a trailer’s soul? 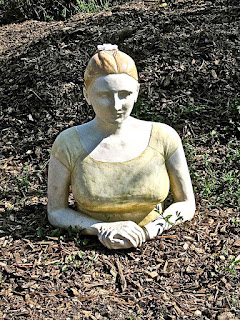 Lenore was a patient soul, but she had tired of always being called “Earth Mother.” It was annoying enough being expected to attend to the emotional needs of her husband, but being on call to everyone else in her life as the problem-solver and human fixer was onerous. Being grounded, she concluded, was not all it was cracked up to be. So, at age 47, after years of ‘being there’ for everybody else, she decided to emerge from the earth and assert herself as an independent woman who was going to put her own needs first. Initially, this was a tentative process and her face reflected her ambiguity. But the final outcome was never in doubt. She would rise up, take charge of her life, and finally stand on her own two feet. It might take a little longer to clean her nails, however... 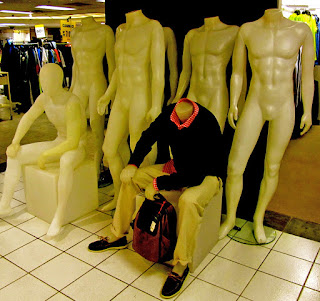 Lance had not signed on for this. He had no idea that his first major modelling assignment at Lord & Taylor’s bargain basement was a ‘clothing optional’ gig. And when he objected to undressing, the other models bit his head off. But his parents had raised him well. He knew that mannequins were only as attractive as the clothes they wore.

And yet...he was aware of how hot the other models looked in the buff. And he knew that underneath his own clothes, he was just as chiselled as they were. Maybe it wouldn’t hurt to take his clothes off...just this once...

The actual picture: a display at The Bay, Yonge & Bloor, Toronto, February, 2015

Albert and Harold were never able to acknowledge the depth of their feelings for each other. After all, stone carvers in Edwardian London were a dour lot at the best of times. The two men spent their days in silence working on a sculpture for the new Palace of Industry. With infinite skill and patience, they carved the upper torsos of two noble labourers, Albert sculpting the man on the left and Harold sculpting the man on the right. Gradually, two magnificent men emerged from the stone. One day, Albert noticed the figure on the right looked like him, and Harold noticed the figure on the left looked like him. The two carvers glanced at each other, their eyes locking. The men teared up but remained silent. Unspoken messages were sent and received. And understood. And then they went back to work...