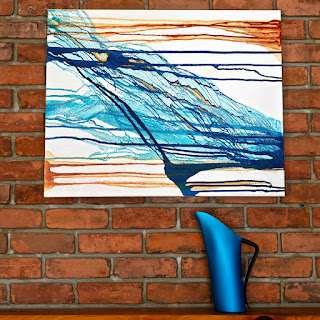 A slightly different blog post today – a small meditation on one photograph, to which I hope to bring some quality attention.

The photograph features a painting and a water jug. Both these objects are above the fireplace in our living room.

There is a story behind each.

The painting is entitled “Glacial Surge” and was created by Dayna Law (Link), a gifted artist who lives in Wellington in nearby Prince Edward County. The fact that Dayna is a good friend of my husband, Bill, and me makes the painting that much more special. Dayna has an amazing sense of colour and flow in her paintings – you can feel the energy pulsing through them and reaching out to you. That energy is one of the reasons Bill fell in love with the painting when he first saw it at an exhibition in Prince Edward County about four years ago. Dayna even loaned us the painting to ‘test drive’ in our home. It looked beautiful, but for whatever reason, we decided against buying it. We met the painting again last summer at Dayna’s studio. And once again, Bill was smitten. It grabbed his heart and wouldn't want to let go. That’s the way it often is with people and objects that you fall in love with. I call it the “Velcro Factor”.

But Bill couldn’t see his way to actually buying “Glacial Surge” that day, although we had talked about wanting to have one of Dayna’s paintings in our home.

Coincidentally, I had been thinking about what to buy Bill for Christmas, and I suddenly knew: “Glacial Surge” would be the perfect gift.  The painting had waited patiently for the stars to line up. I conspired with Dayna to buy the painting behind Bill’s back and picked it up while he was away at a quilting conference last autumn. It is no mean feat to keep a secret from Bill Stearman, but I managed to do it. He was totally surprised on Christmas morning. “Glacial Surge” has now claimed its rightful, permanent place above our fireplace. And it looks gorgeous, especially early in the morning when the light catches it just so. As it does in the photograph.

The other object is a titanium blue F!NK Water Jug that was made in Canberra, Australia. I first encountered – and fell in love with – the jug at Gallery Salamanca in Hobart, Tasmania, last February. Bill and I were staying in the nearby Battery Point area of Hobart. It is adjacent to Salamanca Place, a major arts hub near the Hobart waterfront. For several days, Bill and I sauntered into Gallery Salamanca to admire the jug, drink in its sleek, elegant design, and fret about the cost. We learned from the friendly gallery attendant that the jug had been designed by Robert Foster, a talented and well-known artist who founded the F!NK Studio (Link) in Canberra in 1986. Sadly, Robert Foster died in a car accident in 2016, but his family carries on the Studio. Finally, I admitted to myself that I simply had to have it, so I gulped, pulled out my VISA card, and did the deed – something the gallery attendant knew I would eventually do. Apparently, I am not alone in going through this process! And so the jug sits on our mantle, looking beautiful. We have never used it as a jug. Who knows whether we ever will? Doesn’t matter a whit.

Each of these objects can stand on its own and generate joy just through its physical being. But the two of them together, especially in the early morning light, are spectacular. They talk to each other.

I feel blessed having them in our home. Enjoy the photo.
Posted by Larry Tayler at 15:55