I’ve enjoyed studying history for over sixty years. Inspired by gifted teachers, I majored in Canadian history at university. The more I studied history, the more nuanced it became. I once naïvely believed that history was fixed – a universally agreed set of facts, dates, causes, and consequences. Frozen in time, never to be reconsidered, only to be recalled.

Then I grew up.

The world was infinitely more complex than that. Disputed understandings of the present lead to disputed understandings of the past. New insights, evidence, and theories constantly arise and challenge established versions of events. I clearly remember the day a world-altering insight registered in my young mind: history depends on who writes it. And those who write it used to be the ‘winners’, predominantly white and male. Of the many revolutions currently roiling the marketplace of ideas, one of the most important has been the opening up of history to alternate perspectives, especially from disenfranchised, oppressed, and previously silenced voices. The cat and the mouse experience the same events very differently.

Which brings me to Canada’s first Prime Minister, John Alexander Macdonald, aka ‘Sir John A’.

Some background for non-Canadian readers: born in Scotland in 1815, Macdonald migrated with his family to Kingston, Upper Canada (now Ontario) in 1820. He started practising law in nearby Picton in 1833. His legal career took him back to Kingston and into politics. Ultimately, he became the prime architect of Canadian federation. Tradition calls him ‘The Father of Confederation’. As a result of his leadership, cajoling, and arm-twisting, the Dominion of Canada came into being on July 1, 1867, a date now designated as Canada Day. In the beginning, it comprised three British North American colonies: Nova Scotia, New Brunswick, and the Province of Canada (modern day Québec and Ontario). In subsequent years, Canada expanded to all the land mass north of the USA to the Arctic Ocean, with the exception of Alaska.

Macdonald was Prime Minister twice: from 1867 to 1873; and from 1878 until his death in 1891. He was a towering, controversial figure who inspired both passionate support and deep loathing. He spearheaded the building of the Canadian Pacific Railway to bring British Columbia into the federation, connecting the country with a line of steel in 1885 – but not without scandal, rancour, and violence.

Macdonald helped forge a country that arguably would have been swallowed up by the ravenous United States had he not stubbornly stood his ground.

I have always had a fond spot in my heart for Sir John A. He helped found the land of my birth, the land I call home, the land I love. He was a larger-than-life figure who strode this country like a colossus. His personal life was marked by grief and tragedy. He was a notoriously heavy drinker. He was deeply flawed.

And, it turns out, he was a racist, even beyond the standards of the late 19th century, when Canada’s predominantly white culture was pervasively and casually racist.

Which takes us to Canada’s infamous Residential Schools for Indigenous children and The Indian Act.

The children were forbidden to speak their birth languages and forced to learn French or English. Their cultural practices were banned. And – appallingly – they were subject to massive abuse: sexual, emotional, and physical, often at the hands of priests and nuns. It is estimated that 150,000 Indigenous children were coerced into attending these schools from the 1870s until the last one closed in 1996.

The trauma suffered by these children is incalculable. Tragically, the trauma reverberates from one generation to the next. The profundity of the racism inflicted on the bodies, minds, and souls of these children is vast, nauseating, and heartless. And the wretched consequences continue to be felt in every corner of this land.

If you want to learn more about the obscenity of the Residential Schools, a sobering starting point is the 2015 final report (link) of The Truth and Reconciliation Commission of Canada (TRC). The TRC was established in 2008 to document and assess the impact that Residential Schools had – and continue to have – on Indigenous peoples in Canada. The report’s unflinching honesty and rage needs to be required reading for every Canadian citizen. Its ninety-four “Calls to Action” (link) remain, sadly, mostly unfulfilled.

The second element of Macdonald’s racist legacy was his attitude towards the Chinese. In 1885, he said in the House of Commons that allowing Chinese people to settle permanently in Canada would mean that “the Aryan character of the future of British America would be destroyed.” He also considered that the 1885 passage of The Electoral Franchise Act, which took the vote away from men of “the Mongolian or Chinese race”, to be his “greatest achievement.”

Completing Macdonald’s trifecta of racism, historians have uncovered evidence of his support for the Confederate cause in the American Civil War (1861-1865) and even suggest that these sympathies influenced his choice of the word “Confederation” to describe the new Canadian nation.

Let that one sink in.

(See “Reconsidering the Underground Railroad: Slavery and Racialization in the Making of the Canadian State” by retired Queen’s University/University of Toronto professor Abigail Bakan, Journal of the Society of Socialist Studies, Spring 2008, pages 18-19. Link)

So, when I examine John A. Macdonald’s legacy, I see institutionalized, state-sanctioned racism.

I often hear people say that we mustn’t judge the past by the standards of the present. I disagree. That’s what the modern study of history is predicated upon: contemporary eyes critically examining the past while discerning guidance for the future. And sometimes these contemporary historians discover that our past leaders behaved very badly indeed, even by the standards of their own day.

So the conundrum becomes: how do we recognize the contributions of such figures in our past, while acknowledging the profound damage their policies and actions caused? 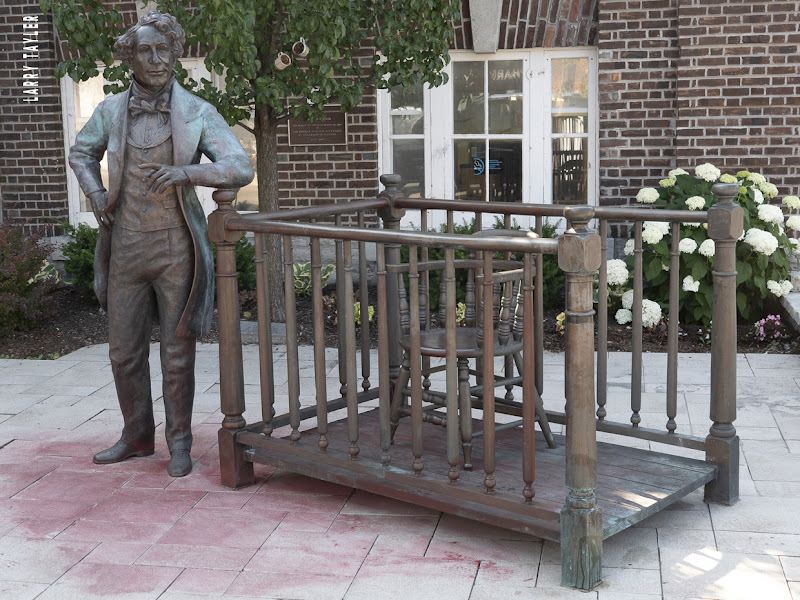 Which brings us to Holding Court, the 2015 statue of Sir John A. Macdonald by the gifted Canadian artist Ruth Abernethy. The statue stands in front of the Picton Public Library and commemorates Macdonald’s first court case in Picton, October 8, 1834, although the details of this case are disputed.

Holding Court is the source of controversy in Prince Edward County: some staunchly defend the statue as a celebration of Picton’s – and Canada’s – heritage, while others want it removed because of Macdonald’s traumatic treatment of Indigenous peoples. Red paint has been thrown on it twice in recent weeks. 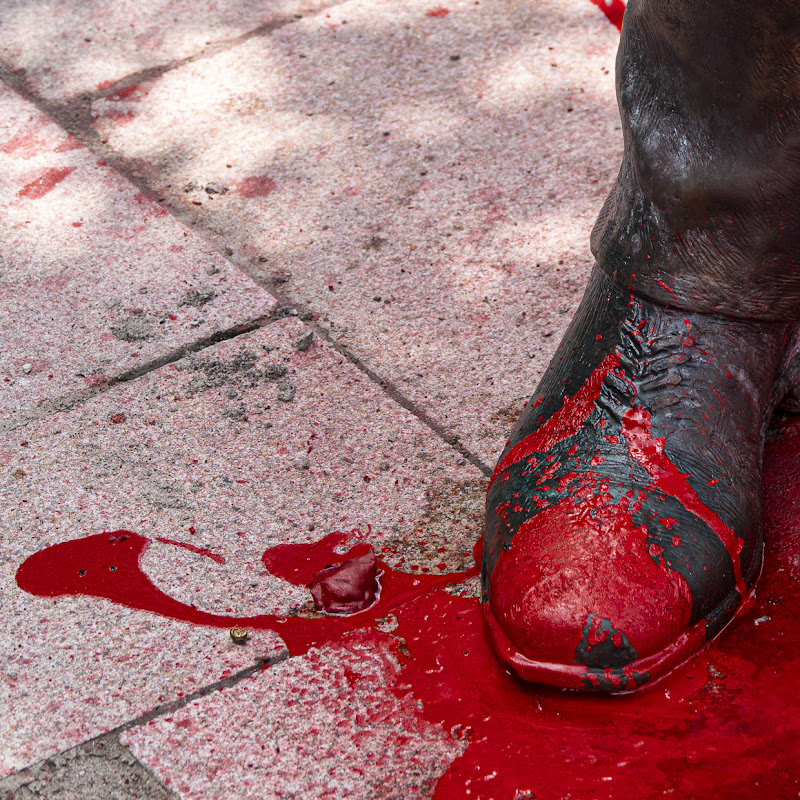 Full disclosure: in 2015 I donated money to The Macdonald Project, the organization that proposed and raised money for the creation of Holding Court. (link) My opinions about Macdonald have evolved since then; were that fund-raising campaign held today, I would not support it.

The County of Prince Edward, the municipal government that is the custodian of Holding Court, has established a community consultation process about the statue’s future. Representatives of the nearby Mohawks of the Bay of Quinte are part of this process. I will follow the consultations closely.

My views: Holding Court cannot continue as it currently exists. The painful reality of Macdonald’s racism and treatment of Indigenous people demands – at the very least – contextualization and recognition of the ongoing trauma.

One option is to relocate Holding Court to Picton’s Macaulay Heritage Park for display in a museum setting.

In any case, it cannot stay where it is, as it is.

Another approach would be to remove the figure of Macdonald from Holding Court, while keeping the empty witness chair on public view. I like the powerful metaphor of that image – an eloquent reminder of my country’s unwillingness to acknowledge its past.

Thanks to the miracle of Photoshop, this is my version of Holding Court, without Macdonald. 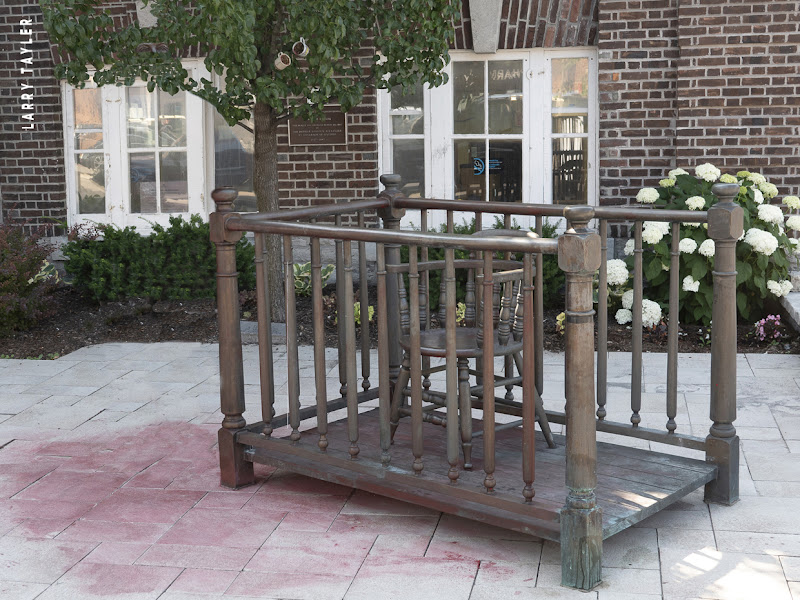 I recognize, by the way, that artist Ruth Abernethy might object to having the two elements her sculpture split apart.

I have had people – white people – tell me that, while they claim to understand the anger felt by Indigenous peoples about their racist treatment in the past, it is now time for them to let go of that anger and move on. In other words, “Get over it.” The mind-numbing racism of this thinking leaves me speechless. The racial wounds are so profound and deeply embedded in Canadian society that a simplistic push for ‘closure’ trivializes and exacerbates intergenerational Indigenous suffering, leading to further traumatization. Rather than healing the trauma, such a push merely reflects white reluctance to acknowledge Canada’s reprehensible treatment of Indigenous peoples.

I hope that this modest essay helps promote a healing path.

I am going on hiatus for a few weeks while Bill and I move to Picton. I plan to re-start photography, writing, and blog posts, early in the autumn.

Until then, stay safe, stay well, and stay curious.

The photographs that follow come from a photo collage project I developed two years ago as my thinking about Sir John A. Macdonald began shifting.

Belleville (soon to be Picton), Ontario 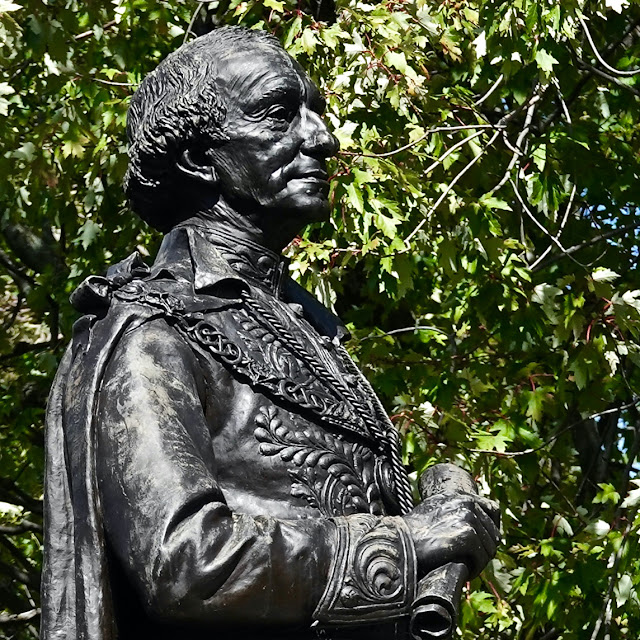 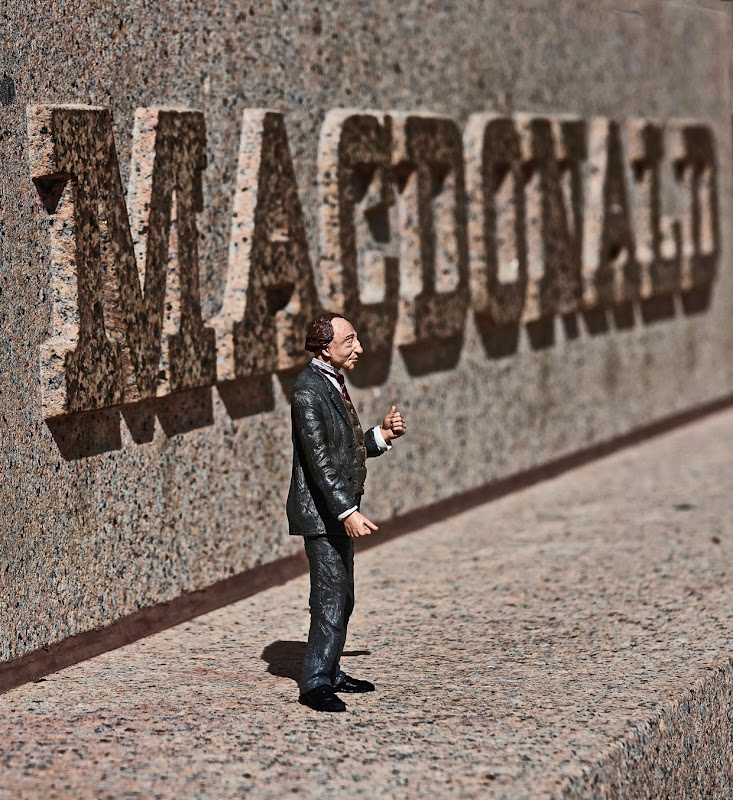 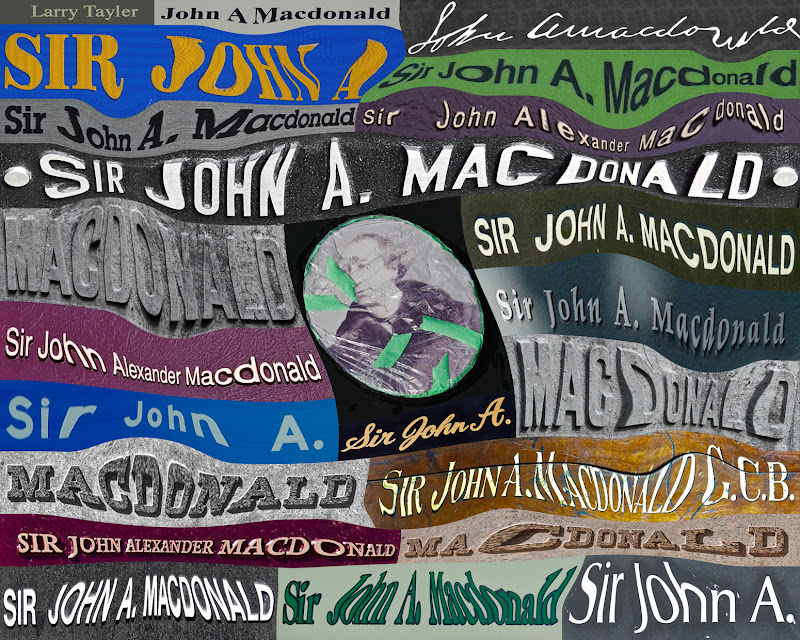 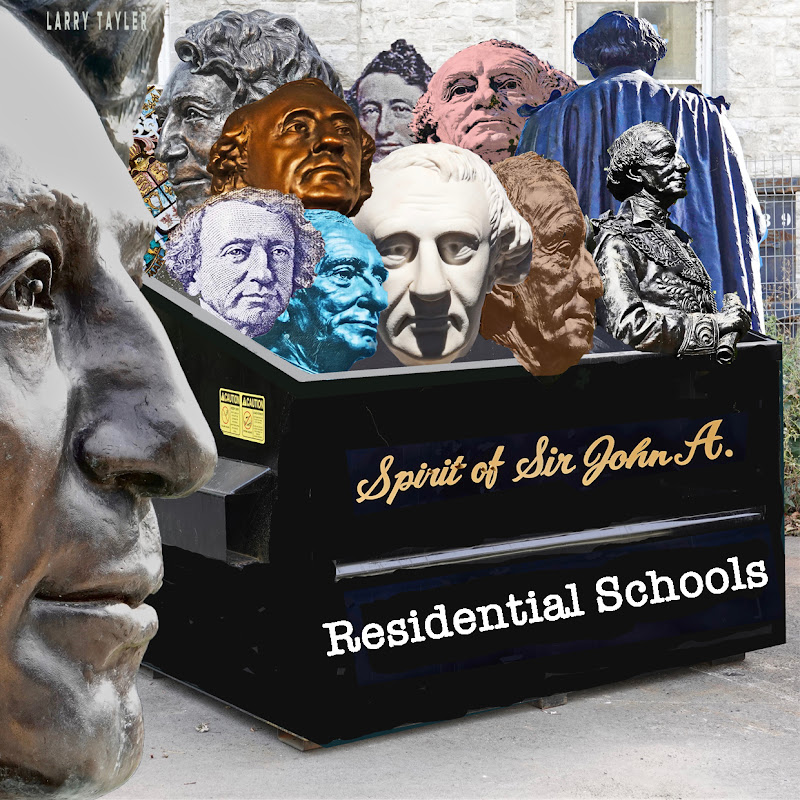 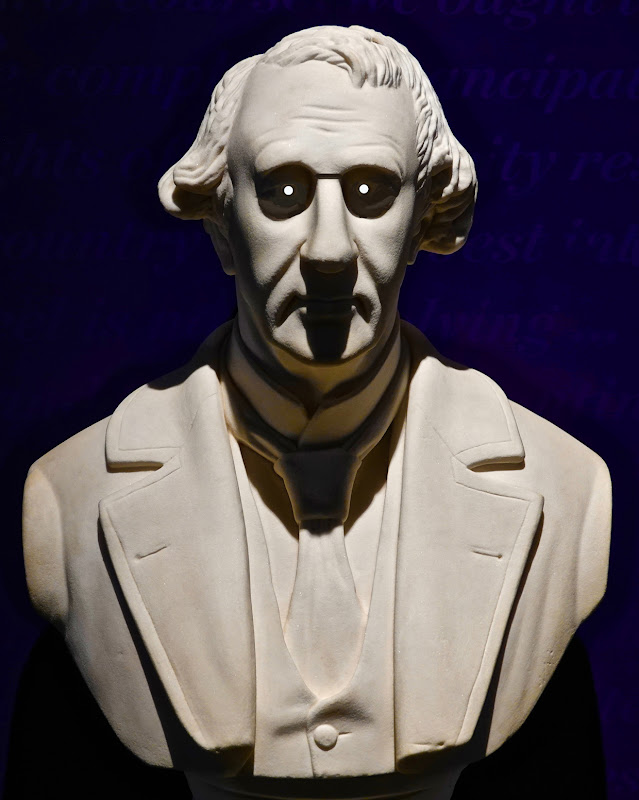